We provide high level instructions by having very experienced and skillful professors to lead our classes! They’re all trained under the amazing Gracie Barra methodology, GB ICP certified, CPR certified and background checked. 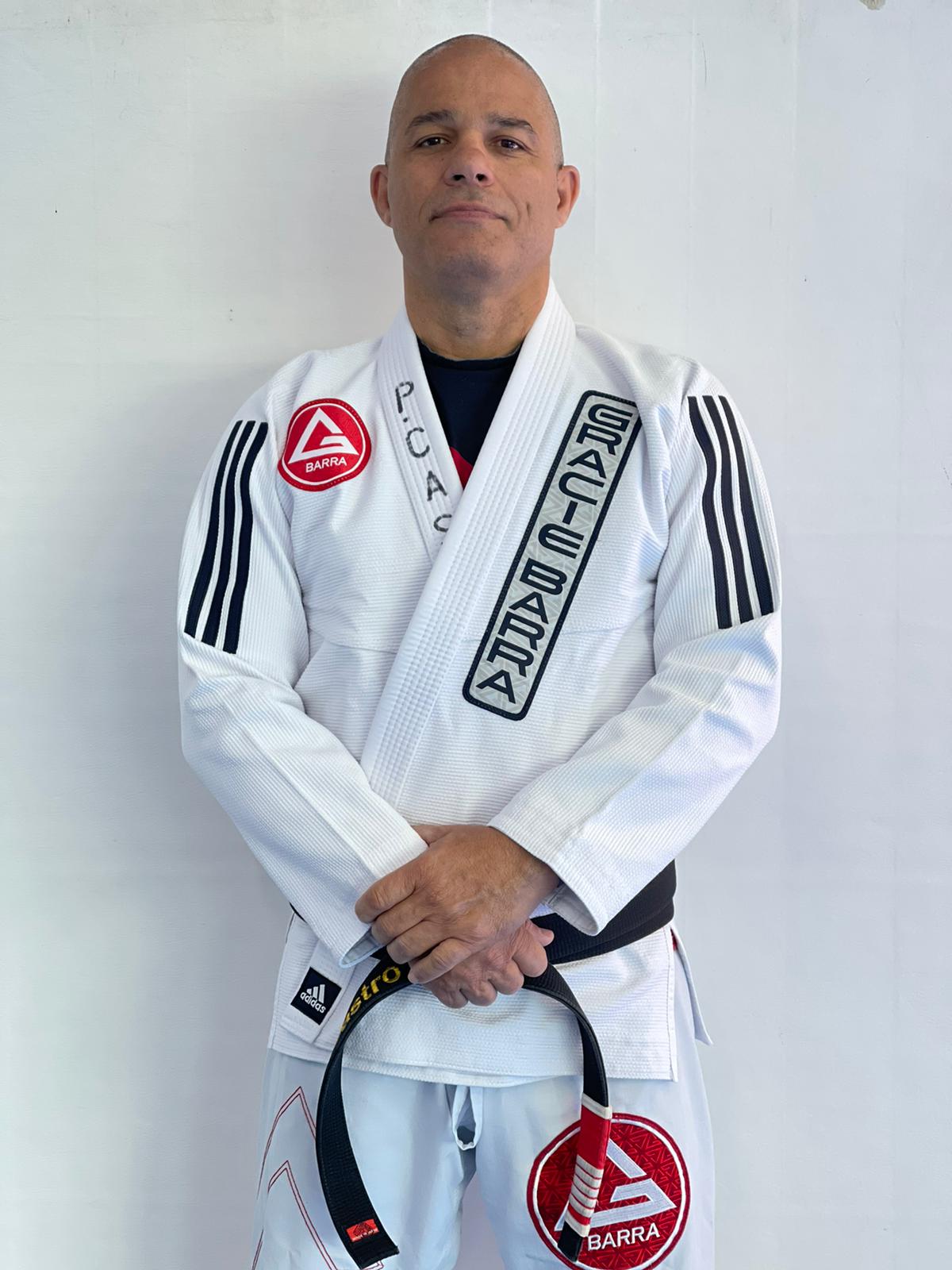 Professor
Master Paulo Castro is a 5th degree black belt, with more than 20 years of black belt experience. He began his journey in the first Gracie Barra academy in Rio de Janeiro. He is always competing and teaching jiu-jitsu while divulging the philosophy of the master Carlos Gracie and seeking to do the best by Jiu Jitsu and the community. 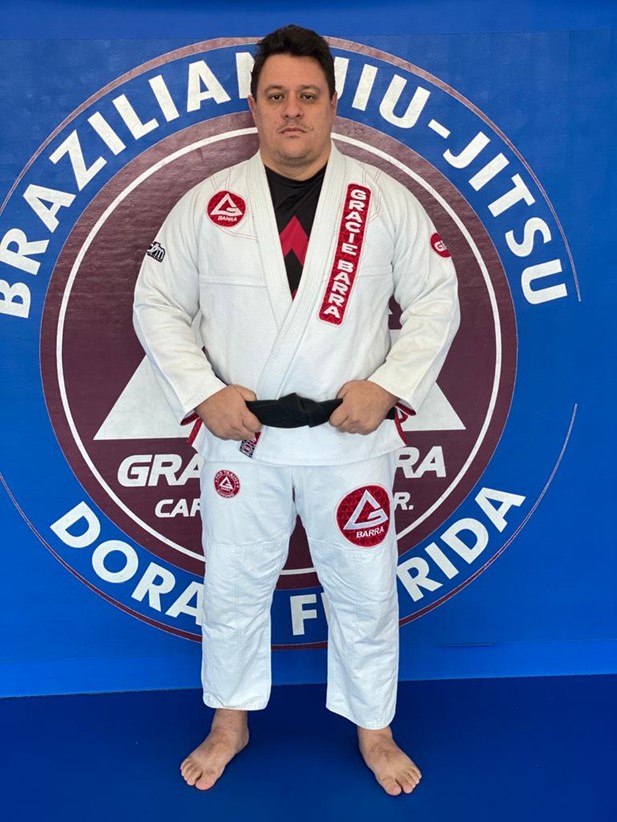 Professor
Prof Ernesto started his journey with Martial Arts by training Judo in Brazil, then he started jiu jitsu in USA with Prof Montanha and He joined Prof Paulo Castro team in 2014, and has been training at Gracie Barra Doral since. He had the honor of receiving his Black Belt from Prof Paulo Castro who is his long term best friend. Prof Ernesto Queiroz is a valuable Prof in Gracie Barra Doral, and he usually teaches his students ways to use the jiu jitsu mindset in real life, like in business, as a father and a family member. 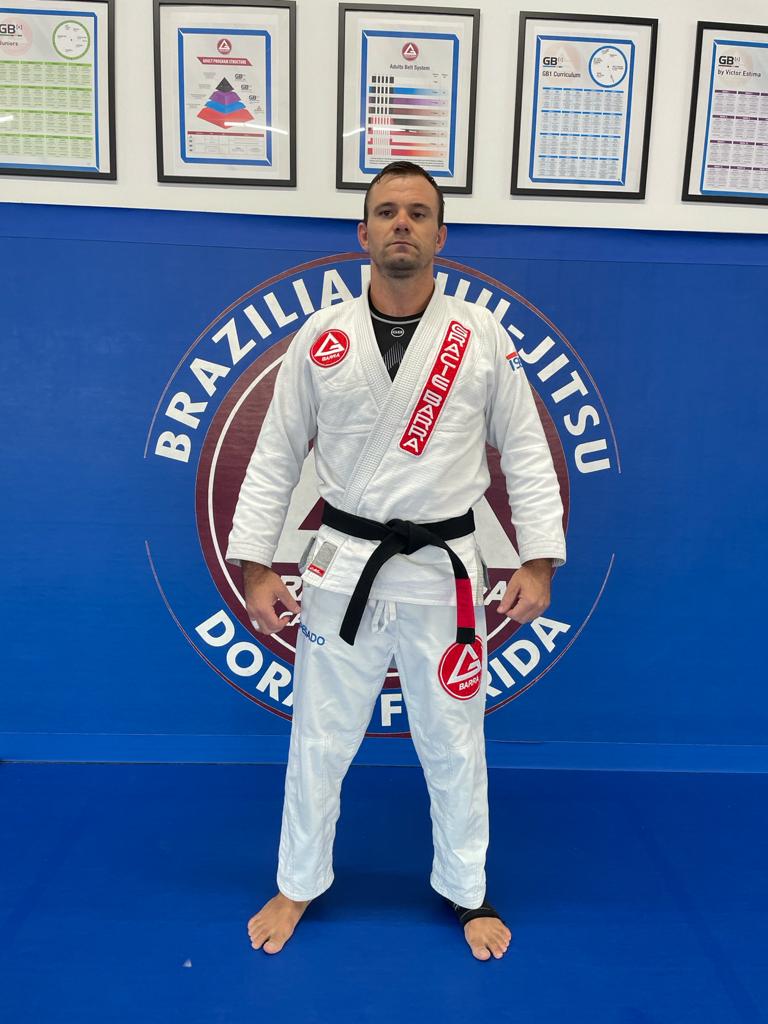 Professor
Rafael Santos is a black belt under master Paulo Castro. He started his Jiu Jitsu journey in Brazil in 1997 with master Ricardo Murgel where he trained until 1999 and graduated to blue belt third degree. After finishing school he could not keep up with training, university, and work. 15 years later in 2015 already living in Miami he joined Gracie Barra Doral where he still trains and teaches. He is a father of a 5 years old girl and a 3 years old boy who also started training Jiu Jitsu at Gracie Barra. 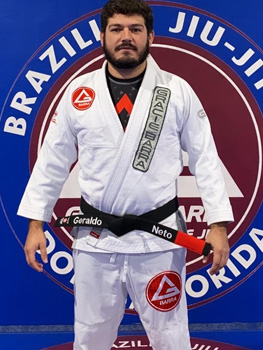 Professor
Geraldo is a Black Belt Professor and the No-GI Coach at Gracie Barra Doral. He is originally from Bahia, Brazil, where he started martial arts (Judo and Capoeira) as a kid, until he tried his first Jiu-Jitsu class in 2011, since then he never stopped and plans to earn his black belt and continue teaching and spreading the GB method. 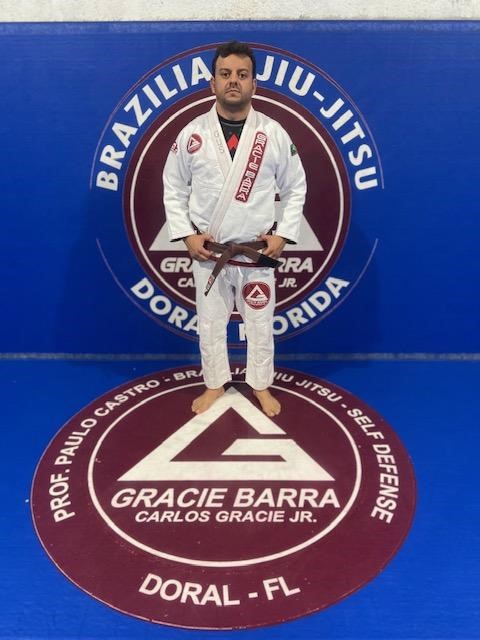 Instructor
Gustavo de Lorena (coach Gus) started his jiu-jitsu journey back in 1998 in São Paulo, Brazil.
He holds a brown belt under Master Paulo Castro’s leadership and his passion for Jiu-Jitsu motivates him to teach kids, adults seeking his best through the Gracie Barra philosophy and teachings to continue the legacy by bringing Jiu-Jitsu for Everyone, as such Gracie Barra Doral is an extension of his family having his kid and all family member involved in everyday's Gracie Barra Doral activities. 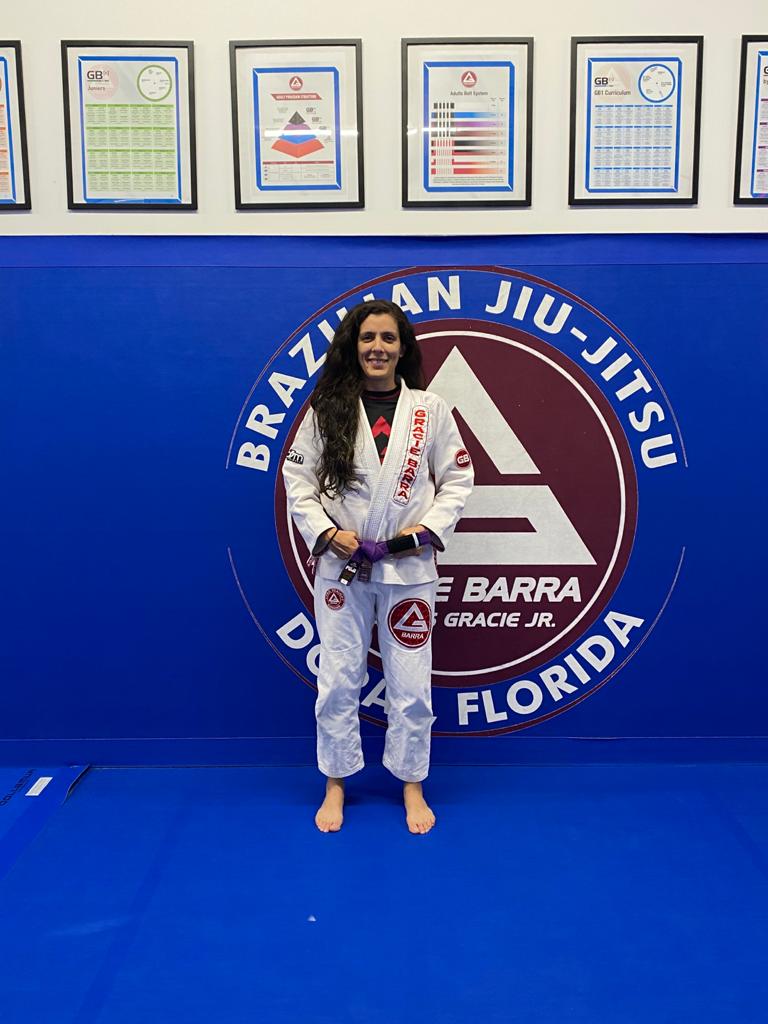 Coach
Michelle began training Brazilian Jiu-jitsu in 2015 and is currently a Purple belt under Professor Paulo Castro's leadership. Michelle brings a combined 7+ years training martial arts, having trained Krav Maga for 5 years.
Michelle’s interest in martial arts began when she wanted to learn a practical and efficient form of self-defense. She immediately fell in love with combative training and eventually started teaching Krav Maga classes her last two years at Academy. After years of training the self-defense system, she wanted to learn the art of ground fighting in order to become a more well-rounded fighter. When she first tried jiu-jitsu at Gracie Barra Doral, she instantly fell in love and was surprised of how effective ground fighting was, even for a petite woman like herself. She hasn’t looked back since and trains jiu-jitsu on a regular basis, as she believes there’s nothing that compares to it.

She enjoys competing in jiu-jitsu tournaments and most notably won Gold at No Gi Worlds Championship 2017, making her a World Champion in just 2 years of training BJJ. For her, the benefits of training are life-changing and have proven to build confidence, self-awareness and self-love. Michelle’s goal is to inspire women of all ages to learn how to defend themselves while getting a good workout and having fun at the same time. The relationship bonds she’s built with her fellow training partners, Professors and coaches are also life-changing and very special to her. Her long term goal in jiu-jitsu is to continue to train, compete and become a Gracie Barra black belt one day. 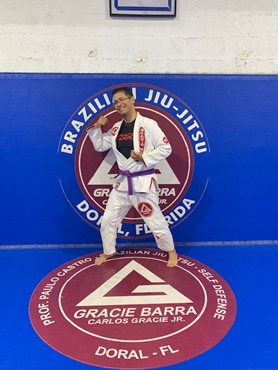 Coach
Coach Sean Fisher comes all the way from Taiwan, he is a Purple Belt and has been training for two years. He loves jiu jitsu because it has motivated him and he usually says “It helps me forget about everything else”. He enjoys teaching the kids because he feels like he is giving back what he gain with Jiu Jitsu, and the best way to learn is also to teach. 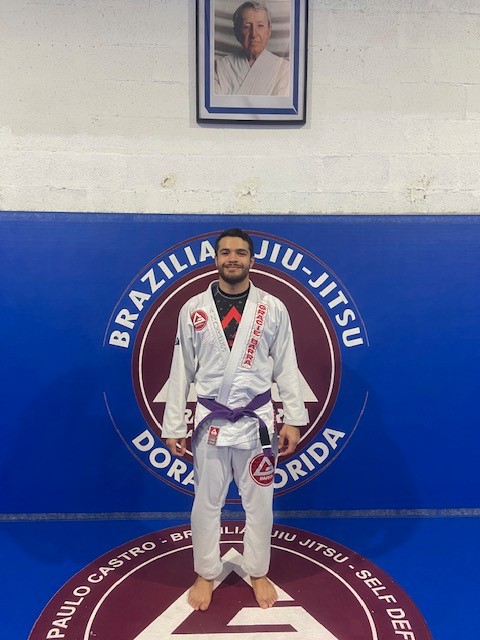 Coach
Coach Andres is originally from Venezuela but raised here in Miami. First martial arts he was introduced to was taekwondo and practiced many years as a child, as he got older he did many sports always being an athlete and excelled in the sports he participated in. Notably in American Football, having 10 years of experience and at the college level as well. He first experienced Jiu-Jitsu when he was 15 years old, only did it for a couple months until he kept training in football. Years later, in his 1st year in college he decided to pursue a different dream, which was going to be in Jiu-Jitsu. He started Jiu-Jitsu so he can be an MMA fighter but once he had a taste of Jiu-Jitsu his plans changed. He didn’t know he would love it so much to the point that he rather take his chances becoming a Jiu-Jitsu athlete/competitor than being an MMA fighter. Although, he would still love to step in the cage at some point in his life, he found his passion in Jiu-Jitsu. He is an active competitor seeking to take home big goals in his life like winning World Championship, fighting at ADCC, Abu Dhabi Grand Slam, winning Pan ams, and many more. He found Jiu-Jitsu to be a life style rather than just a hobby. He now has 4 years training and plans on making it many more years to come. He now teaches kids classes as well as no gi and adults classes. 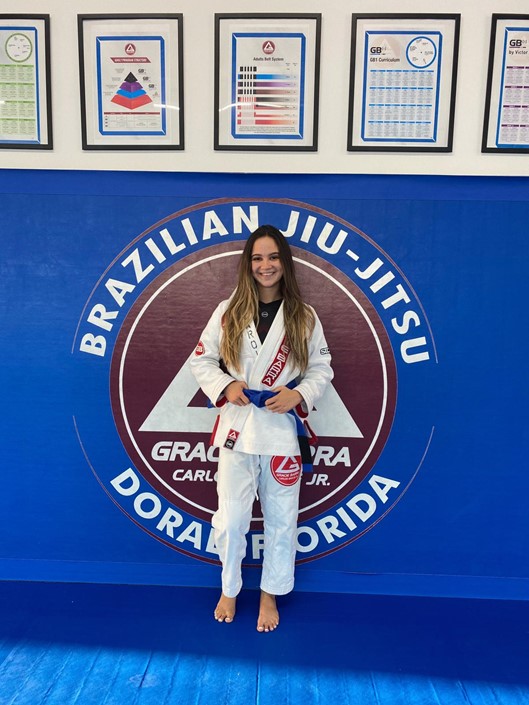 Coach
Coach Carol is currently a blue belt under Professor Paulo Castro. She started her Jiu-Jitsu journey a little more than a year ago at Gracie Barra Doral. She is originally from São Paulo, Brazil, but has been living in Florida since 2018. She is passionate about Jiu-Jitsu and learning new techniques. In addition, she believes that training at Gracie Barra is more than just a physical activity, is being part of a family. For that reason, she enjoys teaching the kids classes, helping them understand our core values of brotherhood, integrity, and development. 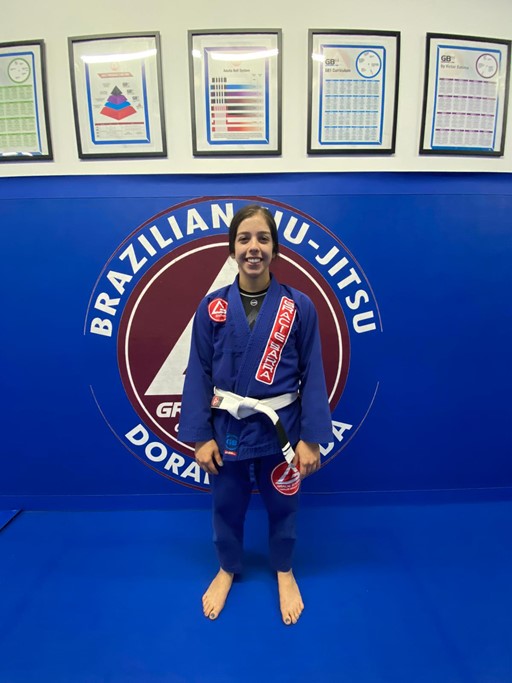 Coach
Emiliana was born in Caracas, Venezuela and moved here to Miami at a young age and has lived here ever since. She was introduced to martial arts at a young age, as she practiced karate for a good chunk of her childhood. She started her jiu-jitsu journey fairly recently, in October. She went out on a whim and decided to look up jiu-jitsu schools in her area, little did she know that trial class would change her life. Since that one class in October, Emi trains at least three times a day, everyday. She has now began working as a kids coach and loves teaching what she knows and spreading the love of jiu-jitsu to them. She also works with us as Program Director representing Gracie Barra’s core values in her everyday life! She has recently discovered her love for competing. Emiliana wishes to excel in Competitions for now and in the future, earn her black belt from Professor Paulo.